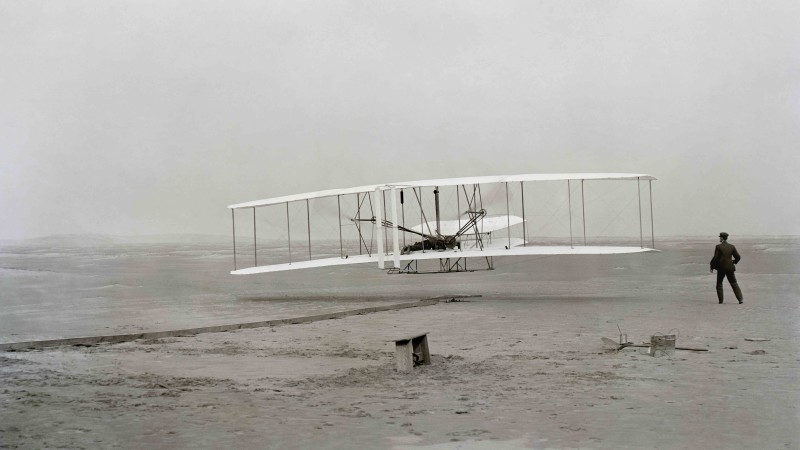 First successful flight of the Wright Flyer, by the Wright brothers. The machine traveled 120 ft (36.6 m) in 12 seconds at 10:35 a.m. at Kill Devil Hills, North Carolina. Orville Wright was at the controls of the machine, lying prone on the lower wing with his hips in the cradle which operated the wing-warping mechanism. Wilbur Wright ran alongside to balance the machine, and just released his hold on the forward upright of the right wing in the photo. The starting rail, the wing-rest, a coil box, and other items needed for flight preparation are visible behind the machine. This is described as "the first sustained and controlled heavier-than-air, powered flight" by the Fédération Aéronautique Internationale, but is not listed by the FAI as an official record. 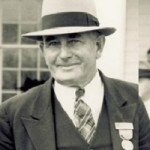 John Thomas Daniels, Jr. (July 31, 1873 – January 31, 1948)was the amateur photographer who took the photograph of the Wright brothers' first flight on December 17, 1903. He was also a member of the Kill Devil Hills Life-Saving Station, and his cousin was North Carolina Senator Melvin Daniels. Daniels later said that he was so excited by seeing the Flyer rising that he nearly forgot Orville Wright's instructions to squeeze the bulb triggering the shutter. Of the photos taken during their 1903 stay in Kitty Hawk, this is one of the clearest, including a photo of the more dramatic third flight that was found to be blurry when processed.